If my people, which are called by my name, shall humble themselves, and pray, and seek my face, and turn from their wicked ways; then will I hear from heaven, and will forgive their sin, and will heal their land.

A nation can not be great again, unless it turns from the acts and rejects the ideas that led it to be not so great. Americans must expect from its leaders, no less than they expect from themselves.

Change begins by first looking in the mirror and saying, “I will stand, I will speak and I will act.”

“We need to do something,” will guarantee that nothing will get done, and tyranny will prevail. Quit searching for leaders to save us. Unless that one person you are looking for, is looking in the mirror and committing his or her Life, Fortune and Sacred Honor to the cause of freedom, you will never find that leader.

I believe that the real revolution to re-found America will begin, not with violence, but with thousands — perhaps millions — of people taking a stand for principles, values and the Constitutional rule of law. How will they take a stand? Call me a loon, but I believe it will be LITERALLY, People standing. Everywhere. Many praying for sure, but not all. Some of them will be simply standing up to the evil that is tyranny and collectivism wherever it rears its head. There will be video, there will be sound, and there will be lots of opportunities to see angry people, mostly politicians, yelling at quiet, prayerful individuals, who have finally decided to stand up and be counted. Quietly. 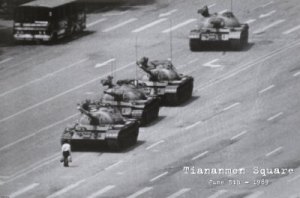 This “imagery” (I’m not sure what to call it myself) came to me over a year ago, probably around January of 2009. I’ve been mulling over it ever since.

Vision? Prophesy? Don’t know. But I do know… something like this is going to happen all across the country, in many, many ways and under varying conditions. Think Tienanmen Square only on the internet. Viral.

What Do Millions of Americans Taking a Stand Look/Sound Like?

No wild signs. No screaming. No chanting. Imagine thousands and thousands of average Americans, gathering for one reason — to take a stand on the principles, the ideas the bedrock foundational purpose of the original document that founded this country. Maybe they’ll start to look like Katy Abrams.:

We hold these truths to be self-evident, that all men are created equal, that they are endowed by their Creator with certain unalienable rights, that among these are life, liberty and the pursuit of happiness. That to secure these rights, governments are instituted among men, deriving their just powers from the consent of the governed. That whenever any form of government becomes destructive to these ends, it is the right of the people to alter or to abolish it, and to institute new government, laying its foundation on such principles and organizing its powers in such form, as to them shall seem most likely to effect their safety and happiness.

Thousands of people — some at local school board meetings, some at the White House, some at local government meetings, some just gathering together to pray or to discuss what real freedom and liberty looks like; what it feels like — just standing up, letting people know where they stand on these foundational principles and issues, and telling their neighbors.

Here’s what’s going to happen (I believe): Tens of Thousands of people will simply decide to just stand up for the Constitution… as individuals! Groups with names and leaders? There will be several, but one unified group, like the Tea Party Movement won’t work. It will be one of many… all with the same overall goal: The Resetting of America. Signs and slogans, charismatic leaders and big names will do nothing but give the Quisling Media Complex something with which to make fun of and marginalize. But thousands or even millions of Americans that are acting independently on the local level and semi-corporately on the national level? The media and the political elites won’t know what to do!

Find out where your neighbors stand on that old piece of paper called the Constitution. Talk A LOT with people about where they stand. What are their principles and values? They all don’t have to be exactly in line with your beliefs, but wouldn’t it be nice to know if your neighbor believes people who think like you, should be put in jail? To me, that’s good info to know.

Go to public meetings. If public representatives begin acting like they are powerless to represent you because there are those higher up that make the rules… remind them that WE THE PEOPLE make the rules, and according to the Constitution, all powers not expressly granted to the Federal government are given to the states and the people. END OF STORY.

STAND ON IT! Don’t take crap for answers. Stand there quietly and wait for an answer that makes sense. When the police lead you away for … for what? … disrupting a public meeting? How? — You will have taken the high (and non violent) road, and your political foes will look like fools.

What’s the plus side of getting carried out of a public meeting for standing peacefully for our founding principles? Others might come out with you and you can all discuss what the Constitution means. You’ll make new friends because you’ll know that THEY also believe in the truth and power of our Founding Documents.

Progressive, Type-A, Community Organizing (of the proletariat) Control Freaks will, of course, be outraged and shocked! They will look for names to call you. There will be plenty, but none of them will be true. They will look for leaders to snoop on and crucify in the media. They will find none. They will take quotes (of our Founding Fathers) out of context and try to prove that all of those Americans out there, standing up for the Constitution are racists and even terrorists.

So what happens when this “vision” happens in real life, and thousands of people are in the streets, simply gathering, talking about the Constitution and some just praying together at various locations across the country?

That’s probably with the violence will start.

We (those who are beginning to participate on the myriad number of patriot-themed networking sites) are starting to read the occasional call for some kind of ‘revolution’ to begin. I can’t emphasize enough, that for everyone concerned about the liberties and freedoms this country has stood for over the centuries, a violent revolution MUST NOT HAPPEN. (Not that we could do anything about it if it did start, but it must not start as a result of a patriot and lover of liberty making the first move.)

I believe that a true cultural revolution can be affected by millions of individuals coming to the understanding of what is right and what is wrong. We need to relearn the meanings of  freedom and liberty as well as the definition of evil and tyranny. Individuals need to feel confident in taking a stand and calling a thing what it is. For example: if an idea is an idea born out of the theories of Karl Marx, then it is Marxism.
Individuals need to stand up among their peers and express confidently and boldly their ideas of what freedom means. If you are called names or shouted down, so be it. Be sure, others who agree with you will see your bravery and wish they had done the same. Possibly they will standing with you next time.
A peaceful revolution starts locally; at school board meetings, local community and civic boards and even on the editorial pages of your local paper. They start with people TAKING A STAND on an issues and ideas, then communicating those ideas to others, then gathering with more and more people who agree with the ideas.
Some Want a Revolution NOW
Believe me, I understand that sentiment. However, no matter how tyrannical things get, the answer to that statement must always be NO, we can NOT have a (violent) revolution right now. Take a look at history! Violence from the dissidents is what Tyrants want. The Boston Tea Party wasn’t that big of a deal, but it was a good enough reason for King George to tighten the screws.

Before Health Care passed, the Congressional Jesters did their own version of a pre-victory perp walk through protesters. DUH! They WANTED people to spit on them, call them names, possibly shove them around that day. And since no one did, they lied about it anyway. “Those Tea Baggers called us names! Waaaah!”
Babies.
But what would have happened if something DID go violently wrong? Imagine the media frenzy if just one damning video got out!! Tea Party/9.12ers/etc. are already pretty much on the domestic terrorist watch list. So… what one thing do most terrorists NOT do? Quietly standing up for what they believe? There you go!

The answer, I believe, is in millions of people, taking INDEPENDENT action by standing up for whatever is right, wherever they are, and being vocal (but not violent) about it. Get to know your neighbors. Find out where they stand on things. IF they don’t agree with you on some very important principles, make a note to not rely on them in an emergency or in a time of crisis… whatever that might be. The neighbors you DO agree with, start going to public meetings together, hold ad hoc public gatherings just to talk about local politics. DO THINGS AND TALK WITH THE PEOPLE WHO SHARE YOUR PRINCIPLES AND VALUES. GROW FROM THERE.

Network in Real Life, not Virtually

If you network with five of your neighbors, and they network with five more and so on, then when tyrannical laws DO go into effect, there will be more people predisposed to NOT COMPLY than who do. And you’ll know this because you’ve actually networked with real, local people, not 1,000 virtual people who contributed to a FaceBook page from all over the country.

YOU can ONLY make a difference if YOU encourage people to make real life contact with like-minded individuals, and then encourage all THOSE individuals to take a stand on the singular, foundational principles and values that drive the issues of the day. Defend liberty by promising yourself, then your neighbors that you will take a stand. Convince them to take a stand with you, then do it again, and again.

This, my friends, is what a peaceful revolution will look like.

Ignoring the state, in other words, standing up for yourself and doing without government intrusion in every aspect of your life, is something that Tolstoy dealt with a long, long, time ago.

Check out Tolstoy’s Letter to Liberals where he answers the question: What then to do?

I posted this to my SkippingSchool.us site to illustrate how people might skip government schooling and reclaim their lives, but it applies to all things, including the health-care debate.

“It would be a dangerous delusion were a confidence in the men of our choice to silence our fears for the safety of our rights; that confidence is everywhere the parent of despotism; free government is founded in jealousy, and not in confidence; it is jealousy, and not confidence, which prescribes limited constitutions to bind down those whom we are obligated to trust with power; that our Constitution has accordingly fixed the limits to which, and no farther, our confidence may go…In questions of power, then, let no more be said of confidence in man, but bind him down from mischief by the chains of the Constitution.”

“Let no more be said of confidence in man, but bind him down from mischief by the chains of the Constitution.”